The historic Coppertop Pub in Basking Ridge is located inside the historic Grain House Restaurant at the Olde Mill Inn, and it has been twice voted one of the “coziest spots to grab a drink” by New Jersey Monthly Magazine. The Pub gets its name from the copper surfaces on both the bar and dining tables. Another interesting fact about the Grain House pub is that it was once a stable. 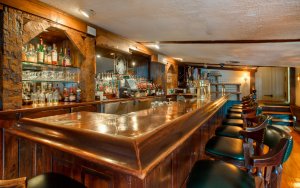 The Grain House has a great line-up of bartenders and mixologists who are happy to serve you every day! Dave has been behind the Coppertop bar at the Grain House for two and a half years. He has been a bartender for 30 years; so trust me when I say he knows what he is doing! When asked, Dave said some Coppertop Pub crowd favorite drinks are a Bulleit Bourbon Old Fashioned and another forever classic, the Cosmopolitan…along with various beers and wines, of course! One of his favorite things about his job is being able to interact with all the customers to become a bright spot in their day. 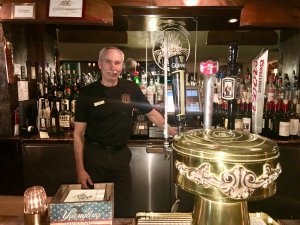 Some key attributes that Dave feels are need for a good bartender are a good memory, keen listening skills, and just simply enjoying what you do. He especially likes when customers come in while they are traveling; he enjoys meeting them and making them feel at home. Bartender Dave feels that the customers enjoy going to the Grain House Coppertop Pub because of the comfortable atmosphere and the warm feel of the place. Dave added that he also enjoys the comaradery of the Grain House staff. 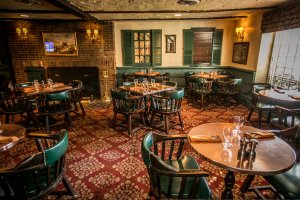 The Grain House employees serve many people each week including new visitors and regulars. Like most bartenders, Dave has come to know some of his customers, and the customers know him! For years, an 85-year-old regular has come in for lunch six days a week. The loyal customer orders Johnny Walker Red to accompany his lunch, and the servers know his order by heart. This past November, he celebrated his 85th birthday with a party surrounded by friends and family in the Grain Room at the Grain House. Dave shared another story about regular customers; a couple comes to the Grain House every year on their anniversary. They bring their very own wine glasses and drink red wine with their romantic anniversary dinner. The Grain House is and always will be a special and cozy place to many.